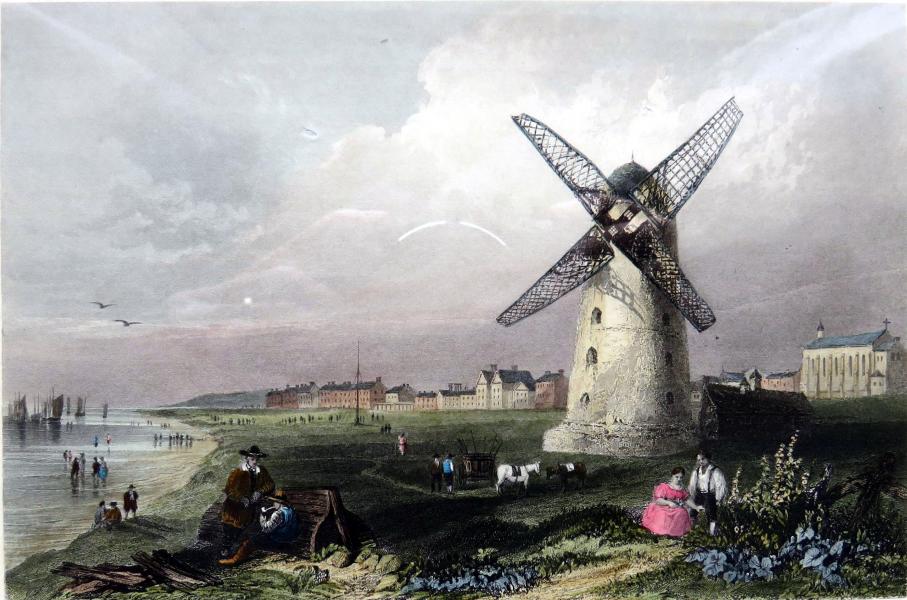 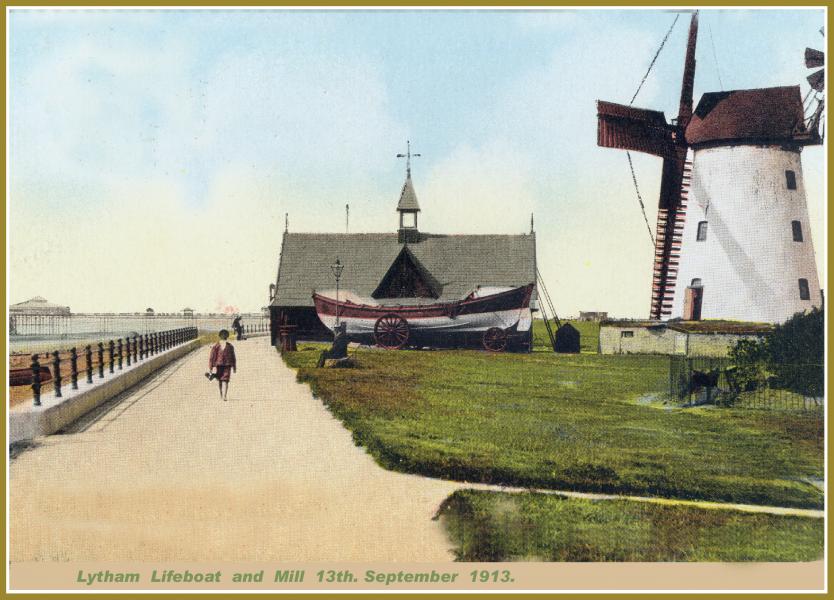 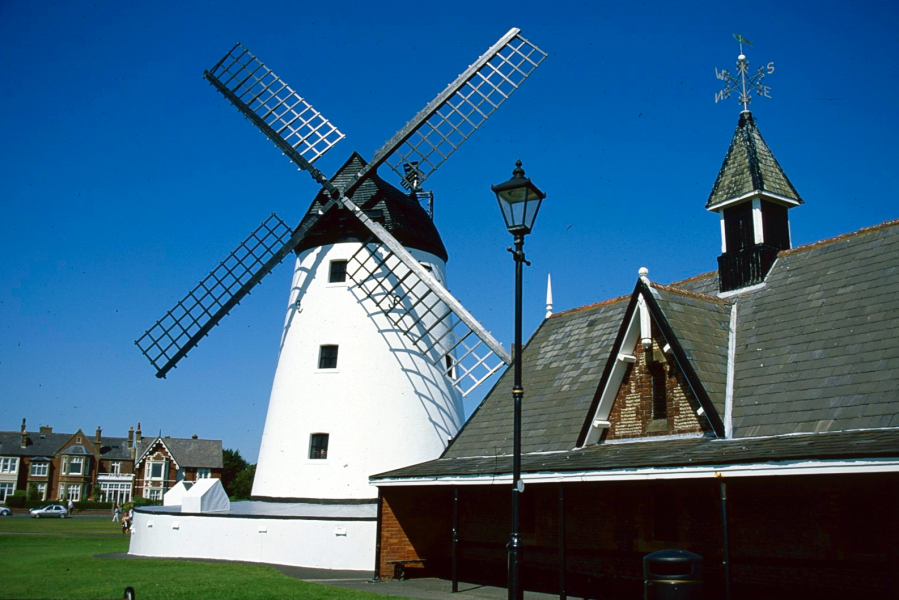 Windmills have played a part in the history of Lytham for many hundreds of years. Ancient documents from the Priory of Lytham, which was founded in 1190 and stood on the site of the present Lytham Hall, refer to an ox—mill, water mill and a “Windy Milne”, and a fragment of the 17th century plan clearly shows a post mill standing between Lytham Hall and St Cuthbert’s Church.

The present mill was built by the Squire of Lytham in 1805 on an area of ground known as Lytham Marsh and was leased to Mr Richard Cookson for a rent of 7/- per year. Some of the machinery inside the mill however, was much older than the mill itself and was no doubt brought in from other disused mills in the area.

The central shaft which was essentially the power house of the machine and transmitted energy to the various working parts, bore a notice which read “this shaft is of Baltic Oak and it has done its work for 150 years.”

When first built Lytham Mill did not have the plinth which now surrounds the base — evidence of this can be seen in the bricked up windows on the inside shell of the basement. It is thought that the plinth was added ten years later. Once curiously described as making the mill look like a candle in a saucer it was built to protect both people and wandering animals from approaching too near the sails. It also served as a platform from which the miller could adjust the sailcloths and cap.

Lytham Mill was always very busy for it was a large mill and served a wide area. The farmers would trundle their heavy sacks of grain by pony and cart along the narrow track which led across the Marsh from Mythop Road, the wheat and oats were left for milling and later collected in the form of flour, meal or bran.

By 1840, however, the mill began to be looked upon as an industrial nuisance by the genteel occupants of the newly built Beach Houses. It was the source of the most distressing noises, chains clanked and sails creaked and clattered, not to mention the smoke from the drying-kiln which was built alongside.

The kiln played an important part in the milling process for grain had to be dry before it was ground into flour, The building housed a furnace fired by peat or wood, over which was laid a floor of 12″ square tiles, each perforated with a series of small holes. The grain was spread out on the floor and the warm air percolating through the tiles soon rendered it dry enough for milling. 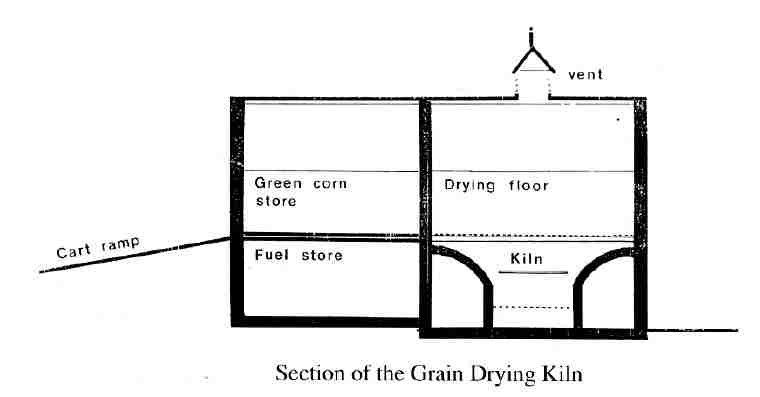 In 1840 the now famous Bartlett engraving (above) clearly shows the Windmill with the kiln in situ. A later picture published in 1856 in the London Illustrated news shows the mill, but the old kiln has disappeared. Due to public demand and the ever present fire hazard it was re-built in Kiln Street (now East Cliffe) in 1849.

Throughout the nineteenth century Lytham steadily increased in popularity as a holiday resort and the arrival of the railways meant more people could enjoy the fresh salt air and healthy sea bathing! Visitors were no doubt intrigued by the unusual setting of Lytham Mill, for by 1840 the sand hills and marshy ground had been levelled and the grassy expanse known as the green extended far beyond the mill. People held picnics and took donkey rides beneath the shadows of the sweeping sails and the donkeys must have eyed the cart ponies as they trundled past with their heavy loads and probably there was sympathy on both sides!

But the mill kept on working and curious holiday makers loved to step inside and investigate the mysterious interior, some even venturing to climb the precarious steps which led to each floor with only a rope to serve as a handrail. And when they had examined the old machinery and brushed the flour-dust from their clothes, they would lest their weight on the great sack scales to see if the Lytham air was doing them any good! Tokens of these visits were left in the form of visiting cards, hundreds of which once lined the walls and shaft, many bearing the names of celebrities of the time.

In its working days the mill had much longer sails than today, for they almost reach the plinth which surrounds the mill. Sadly, this proved disastrous, for in 1909 a small boy, on a school outing from Manchester, playfully clung to one of the sails as it swept past. He was carried aloft and losing his grip, he fell and was killed instantly.

During the early part of this century there began a decline in the use of wind power for milling, windmills being replaced by the large steam driven roller mills which were built in the towns and cities and which could produce and distribute flour on a much greater scale.

Public demand for stone ground flour decreased as the fine white roller milled flour became readily available, despite the fact that, as one old miller put it “the stones coax the flour out of the grain, but the rollers frighten it out!”

Gas engines were installed in many windmills, including Lytham, in an effort to compete but they were not popular with the old millers. Mr William Swann, the miller at Lytham for over 25 years, regarded the “new contrivance” as sacrilege and only used it when absolutely necessary.

On January 1st 1919, a tragedy occurred, a sudden severe gale caused the sails of Lytham Mill to run out of control despite the powerful brake. They whipped round at an alarming rate causing the brake to emit sparks which quickly ignited the whole building. Fanned by the strong wind the flames engulfed the interior and destroyed the cap and sails and most of the machinery which was made of wood. Burning pieces of timber from the sails were hurled 50 yards down the green and over a hundred sacks of oats were destroyed in the fire. An article in the Lytham Standard describing the terrible night tells how Mr Swann had watched the conflagration, and it says “the flames burnt into his heart”. After the disastrous event an eye witness describes the Windmill as a “pathetic sight to all who behold her”.

ln 1921 the Windmill was given to the people of Lytham by the Squire of Lytham, John T. Clifton. The shell was restored and given a new cap and a set of dummy sails and over the years it was used variously as a cafe, as H.Q. for Lytham Cruising Club, the Motorboat Club and the Sea Cadets and was once an Electricity Board sub—station. However by 1963 dry-rot was found to be seriously affecting the interior, and renovation work was carried out at the then staggering figure of £540!

Improvements continued to be made during the following years and by 1975 the mill was sufficiently restored to play host to a series of exhibitions much to the delight of local people and visitors alike. Sadly though, by 1985 the mill was again found to be suffering from age-old problem of rising damp in its ancient timbers.

In 1987 Fylde Borough Council decided to undertake the major effort required to combat the effects of damp. With the help of grants from the European Development Fund and the Countryside Commission a major programme was implemented and over the next two years extensive work was carried out to the interior and exterior of the mill.

The results of this work are remarkable and evident to all who visit, for now, in its retirement our much loved Sentinel of the Beach has been given a new lease of life and along with its memories is set to face yet another era.

Lytham Windmill was re-opened on Monday 20th March 1989 by the then Mayor of the Fylde, Councillor John Tavernor.

The Windmill is now a seasonal Museum managed by Lytham Heritage Group in Partnership with Fylde Borough Council. 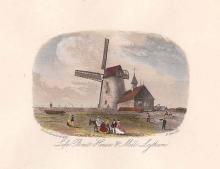 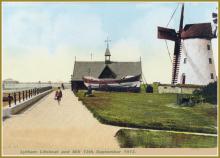 Windmill after the fire
Image 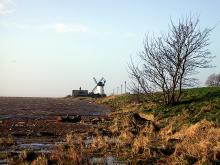 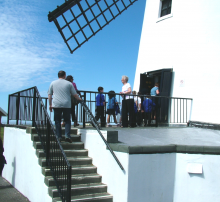