The Story of Lytham Heritage Group

Lytham Heritage Group (The Group) has been in existence since 1987 and is an undoubted success, far exceeding the expectations of the founder members. The volunteers have been able to take advantage of opportunities that have arisen to establish a storehouse of local history and to display this in exhibition format.

As well as promoting Lytham’s history and heritage, The Group now hosts exhibitions by local art societies, individual artists, local schools and community groups, and provides information on what to see in Lytham and where to find it, together with booklets and pamphlets for educational purposes, including the history of Lytham – ‘Our Town’.

Lytham Heritage Group aims to entertain, inform and educate its public – the membership, the local population and visitors to the town.

These activities need invention, management and execution by people, and this requires willing volunteers. To date we have welcomed over 700,000 visitors to the Windmill Museum and the Heritage Centre in the heart of Lytham.

The Group acknowledges the contributions of three former presidents, Fred Treasure, Burt Briggs and Stanley Brown, all alas no longer with us, whose wise counsel was greatly appreciated by the founder Chairman, Alan Ashton. The members of the Executive Committee, past and present work hard and tirelessly for The Group and there are many others who actively support our efforts through giving their time and energy to the activities of The Group, such as stewarding, staging exhibitions, working in the Archive, giving support at social events.

Whilst reminiscences of the past are appealing, there is a need to keep younger generations firmly in mind – they are the next custodians of Lytham’s Heritage, past and ongoing.

At the present time the Heritage Centre sits comfortably in the centre of Lytham – the town needs the Heritage Group and the Group needs the town – we are inextricably linked. 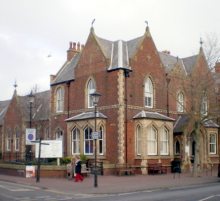 By 1987 a number of people had identified the need for a society or organisation to cope with the ever-increasing amounts of historical material in many forms, relating to Lytham, much of which had been brought to Lytham Library.

Alan Ashton, MBE, the first Group Chairman said, “Local people had inherited many extensive family collections as I had myself. My father, Ed Ashton had written a definitive history of Lytham in 1946. Peter Sharman, Lytham Librarian myself and other like-minded people put a proposal to a public meeting in February 1987 to establish such an organisation.”

This was agreed and in August 1987 The Group took its first opportunity to demonstrate its role when the Baths building, (originally built in 1863), was to be demolished and the site redeveloped.

Fylde Borough Council was persuaded that part of the building fronting Dicconson Terrace with its pillared frontage should be preserved and established as a set of Assembly Rooms for the local community. The Group staged a landmark art exhibition, displaying some 130 paintings by Walter Eastwood, a prestigious local artist. This attracted national and regional publicity. A sponsored schools’ award exhibition was run in parallel and these exhibitions raised much-needed cash to fund The Group at this time. By late 1988, a constitution had been produced which would be legally acceptable to the Charity Commission. Membership arrangements were made and a programme of meetings and social events were arranged to suit the interests of Members.

A Windmill of Opportunity

A second major opportunity to establish the role of The Group arose in 1989. With financial assistance available from the European Development Fund and the Countryside Commission, Fylde Borough Council was refurbishing Lytham Windmill, a heritage landmark on Lytham Green. The Group had been retained as advisers on the restoration of the Windmill and was invited to stage an exhibition of the Windmill’s history. This enhanced the building itself and after the official opening in March 1989, the Council granted a long lease on the Lytham Windmill to Lytham Heritage Group in 1999, which would ensure continuity of the exhibitions.

Members of The Group worked closely with Fylde Borough Council, to advise on the Windmill layout to accommodate visitors with access to all floors and the basement area and a small team of volunteers set out the Windmill exhibition that we see today. The Group also published a booklet about the history of the Windmill and how grain is processed into flour.

The Windmill is open from spring until early September. Mondays and Tuesdays are reserved for school visits. Admission is free, although donations are most welcome to enable us to maintain and continue to develop the museum.

In 2001, the Windmill was granted full registration as a Museum by the Museums and Galleries Commission enabling items to be loaned for exhibition and giving the support of a curatorial adviser. The Windmill exhibition also gained a Silver Award from the NW Tourist Board as a visitor attraction. Members of The Group volunteer their time as stewards at the Windmill, welcoming thousands of visitors every year. By 2016, over 600,000 people had enjoyed its exhibition.

By 1994 The Group had reached a height of activity. The archive collection had been established in Lytham Library and was proving its value. The Group had a presence at many of the visitor attractions in Lytham where visitor donations were encouraged. The people of Lytham had been stimulated to take an interest in the history and heritage of the town. The Group needed to find a location for its administration and a base for regular exhibition activity.

In 1996 the former Trustee Savings Bank, a Grade II listed building (originally built in 1899 for the Manchester and County Bank) and an architectural gem, became available and was purchased by The Group as its Heritage Centre. The purchase, restoration and renovation of the building was enabled by an unconditional Gift which was made to The Group together with The Group’s own funds and support from Gift Aid.

The Heritage Centre currently comprises two exhibition rooms and a reception area on the ground floor, and an office/archive on the first floor. The Group was honoured to receive a Civic Conservation Award in recognition of the excellence of the restoration work. The purchase, restoration and conversion of the building cost The Group in the region of £189,000. 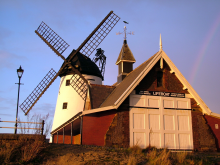 The Heritage Group re-opened the Old Lifeboat Museum next to the Windmill. The building acts as an extension to the Windmill Museum and includes exhibits on the Great Lifeboat Disaster of 1886. This is still the worst single disaster for the RNLI with 13 crew lost from the St Annes Lifeboat and 14 lost from the Southport Crew trying to rescue the 12 men of the Barque Mexico. The museum also contains a fully restored pulling and sailing lifeboat from 1901. The “Chapman” is a Liverpool Class lifeboat and was stationed at Hilbre Island near Hoylake.

With help and support from members and visitors alike, The Group will continue to preserve the records of Lytham’s cultural and traditional heritage and make them available for future generations to enjoy.