It was founded in 1892 and is the burial ground for St Peter's church.

From the Lytham Times:

01/08/1891 - “So far the Catholics of Lytham have no resting place of their own in which to lay their dead, but this will not be altogether so in the future; the Very Rev. Canon Taylor has received a handsome gift from the present Lord of the Manor, in a plot of land covering about one and a half acres, situated at Saltcoats, near Lytham, and this land, which Canon Taylor is at present busied in laying out as a Cemetery, with a Mortuary Chapel in course of erection, this land which in a few months will be consecrated to its holy purpose, will supply the long need of the congregation of St. Peter's, and render for the future unnecessary the resort to the churchyards of St. Cuthbert's Lytham, or "The Willows," Kirkham. About nine hundred Catholics in all are attached to St. Peter's, Lytham, whilst the schools built in 1850, during the ministry of Father Walmsley, together with the infant school added in 1874, by the late Father Taylor - for twelve years Rector of St. Peter's - receive in all 155 scholars. It was in September, 1885, that, on the death of the Rev. Roger Taylor, his brother, the Very Rev. James Canon Taylor, came to take charge of the Lytham Mission….” 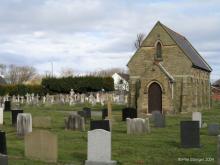