Information about Custom House held in the Heritage Group archives.

The originl Custom House was on Bath St. and then a special building was erected in 1850 at the end of the green closer to Lytham dock. It was occupied by Mr. Thomas Cookson who collected the dues paid for vessels using the dock. It was used to store contraband and also bodies washed up on the beach. It fell into decay when new offices were opened at Preston dock. It was later used as an art studio and then by the sea cadets and demolished so that the Land Registry building could be erected. 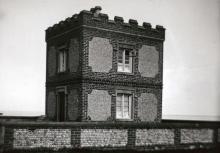