Early Lytham and the Priory 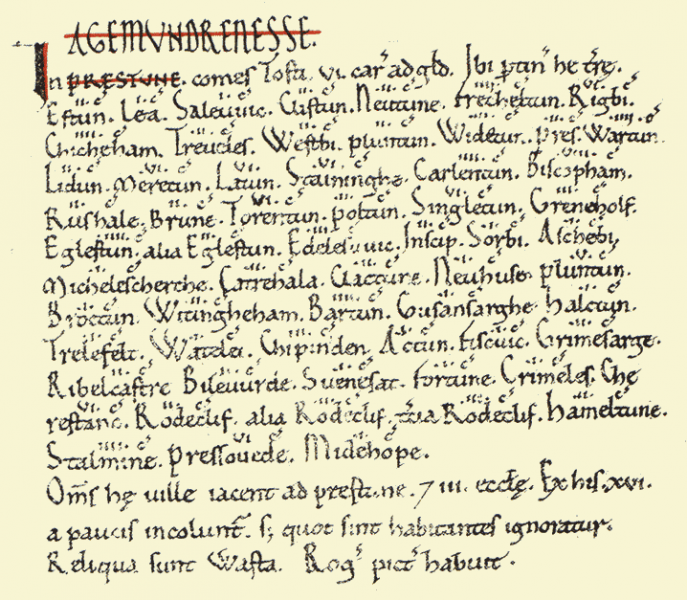 The first written reference to Lytham appears in the Domesday Book. In 1066 William the Conqueror invaded England from Normandy, and in 1086, in order to establish the wealth and income from taxes of his kingdom, he had every county thoroughly surveyed and recorded in the Domesday Book. Lytham appears in the Hundred of Amounderness (Agmundreness - the name is believed to derive from a 10th century Viking lord Agmundre), along with more than 50 other familiar Fylde names, plus a few further east. The entry shows ‘Lidun II cs’ i.e. 2 carucates, a carucate being a unit of land area approximating to the land a plough team of eight oxen could till in a single annual season. It is interesting to see the comparative size of other Lytham neighbours recognisable today, Westby 2 carucates, Warton 4 carucates, Kirkham 4 carucates, Freckleton 4 carucates. It also states (in translation) that ‘All these vills and 3 churches belong to Preston. Of these vills, 16 are inhabited by a few people; but it is not known how many the inhabitants are. The rest are waste.’

William the Conqueror gave Amounderness to Roger de Poitou, an Anglo-Norman aristocrat, between 1080 and 1086 for his services to the realm. By 1188 Lytham was in the possession of Richard Fitz Roger (Fitz Roger=Son of Roger) who gave to the Benedictine Monastery of Durham ‘with the consent of his wife Margaret and of his heirs, …  in pure alms all his land of Lytham, with the church of the same vill, and all appurtenances, in order that the monks might build a house of their order there’. There is no mention of a church in the Domesday book, but it is thought that Roger Fitz Roger's grandfather had replaced an old wattle building with a new stone one dedicated to St Cuthbert, close to where Lytham Hall now stands. A servant of Roger and Roger himself had both been 'cured' when carried into the church, and this gift would have been in gratitude for these 'miracles'. The body of St Cuthbert, a 7th century Bishop of Lindisfarne, was carried round the North of England by the Lindisfarne monks who fled the invading Vikings in 875, and according to local tradition they rested in Lytham about 882, the supposed site being marked by a cross on Church Road by the cricket field.

The Priory was essentially a large house with many outbuildings associated with a working farm, and a inventory of 1446 lists 10 rooms and 7 outbuildings. There were no more than three professional monks, but they were assisted by a number of local staff. The monks' duties consisted of providing religious services to the community and supporting themselves by farming, breeding cattle, pigs, sheep and poultry and growing oats, wheat barley, and an orchard. The Priory was in effect the local landlord, and the local inhabitants were the tenants. The history of the next 300 years can be seen in Priory accounts, records of disputes with neighbouring landowners or tenants, of troublesome priors, and of the Black Death, when it was estimated that between 500 and 1000 died in Lytham.

Before Henry VIII's Dissolution of the Monasteries between 1536 and 1541, Durham had already decided to withdraw monks from most of its cells, including Lytham. Hugh Prior of Durham granted the lease to Thomas Dannett at an annual rent of £48 19s 6d for 'the farm of the said former house or manor of Lytham ... with its church, hall, stables, buildings, barns, dovecots, windmills, shippons ...together with all and sundry arable fields, meadows, grazing land and pasture, ... salmon fisheries, rents, ... courts leet, customs, ... marriages and reliefs, waifs, strays, goods of felons, and wrecks of the sea however they happen, below the manor of Lytham'.